West Arsi Zonal Branch already has a lot of experience with the implementation of WASH projects (see list below) and chose to focus on gender, diversity and inclusion for their Skybird micro-project (details below) besides regular WASH activities.

West Arsi is one of the Oromia Regional State territories with elevations ranging from 1500 to over 3300 m. ERCS Oromia Region West Arsi zonal Branch is among the decisive humanitarian branches, aiming at expanding the access and timely response to humanitarian needs as well as the promotion of broad stakeholder participation. The branch has based its coordination office at the major city, Shashemene, found to the South East part of the country at a distance of 250 km from Finfinne/Addis Ababa. According to the CSA projection of 2018/2019, the total population size within zone is about 2,785,316.

From the existing ERCS Zonal Branch offices, West Arsi Branch is a relatively new branch that was established only fourteen years ago  in 1999 E.C/2007 G.C. 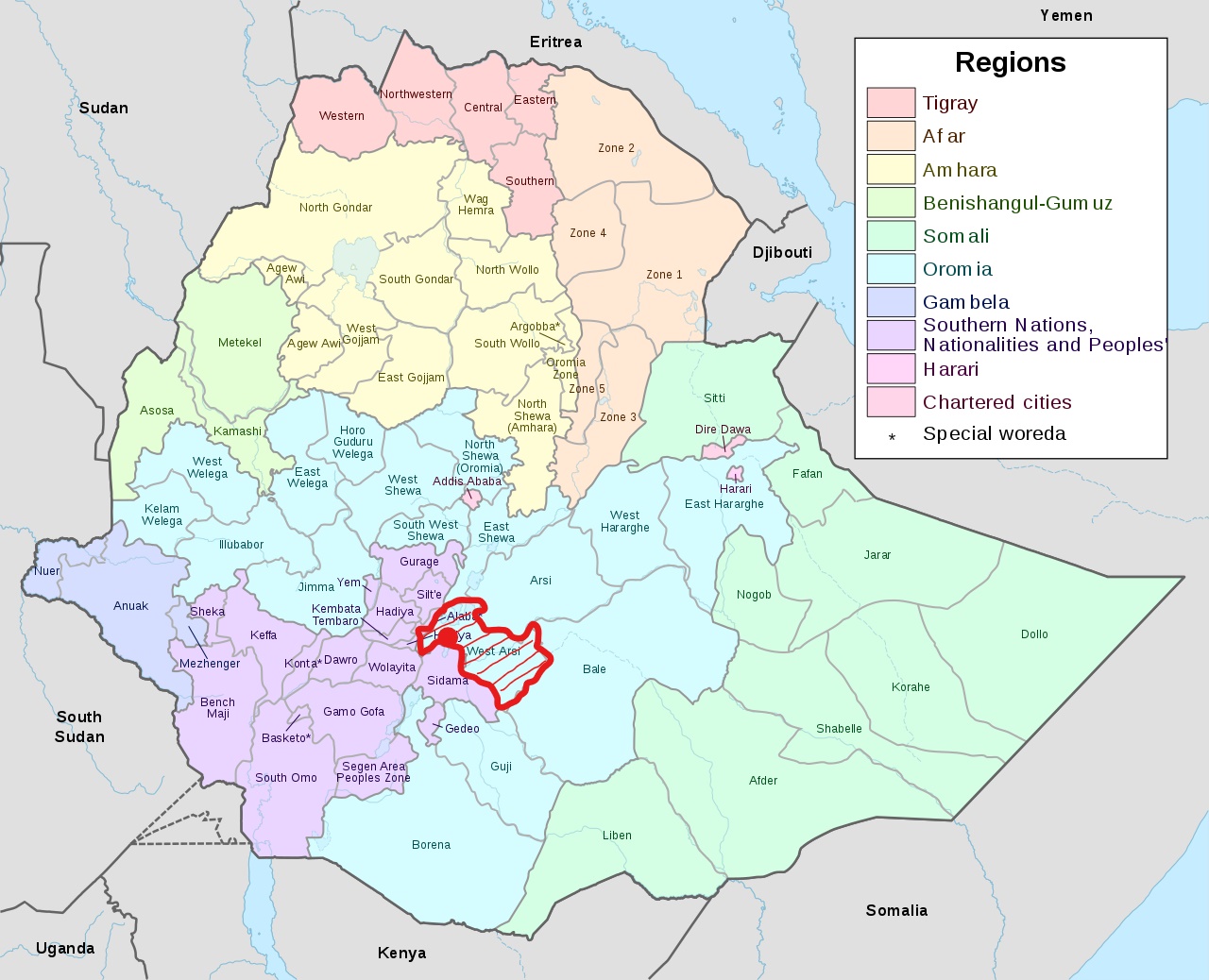 The Zonal Branch also has four Woreda Branch Offices and two pharmacies at Shashemene, One pharmacy at Arsi Nagele Town and two drug stores at Gedeb Hasasa and Adaba town. In total this makes five drug outlets for the Zone.

Reduce the incidence/prevalence of water borne and hygiene & sanitation related diseases in Kofele Woreda, West Arsi Zone. The project included WASH, capacity building and institutional development for the beneficiaries. Through the project, West Arsi Zonal Branch reached 8,450 beneficiaries with a budget of 4,500,000 ETB, supported by Austrian Development Cooperation and Austrian Red Cross. According to this objective, appropriate water and sanitation facilities, 13 hand dug wells and two springs were developed and slabs for 1000 HH were distributed. In addition to this, many software activities were undertaken: 170 community volunteers and health extension workers (HEW) were trained on hygiene and sanitation as well as Participatory Hygiene and Sanitation Transformation (PHAST); practical training on slab construction for 7 youth volunteers and 7 community representatives was conducted.

In Phase II of the West Arsi Water & Sanitation Project, capacity building and institutional development West Arsi Zonal Branch reached: 13,710 beneficiaries with a budget of 5,750,000 ETB, supported by Austrian Development cooperation, Austrian Red Cross and NIN. According to the objective to establish appropriate water and sanitation facilities, 10 hand dug wells were developed and slabs for 1500HH were distributed. Additionally, software activities accompanied the hardware components: 120 community volunteers and HEW were trained on hygiene and sanitation, PHAST, water point management and maintenance and a practical training on slab construction for 12 youth volunteers and 5 community representatives was conducted. 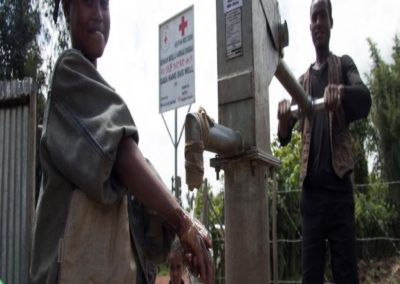 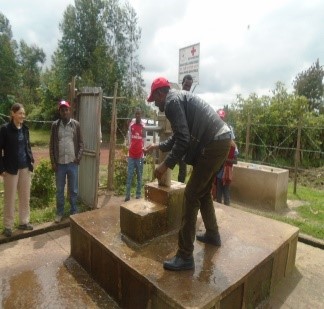 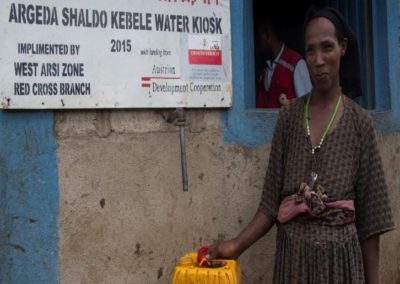 Water kiosk built during the Bishangari Integrated WatSan Project in 2015 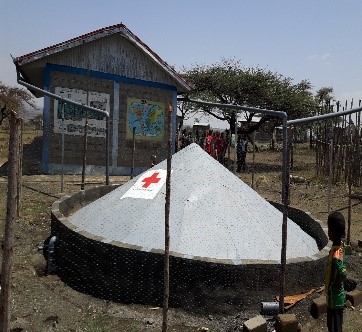 Water tanks with 100.000 l capacity were constructed as part of the drought response in 2016.

The objective was to improve access to save water and reduce vulnerability to health risks in regard to water borne disease in 6 kebeles of West Arsi Zone, Oromia Region. The project reached 10,032 beneficiaries with a budget of 3,365,245 ETB, supported by AutRC, ADC and Swiss RC. The main achievement was the construction of six water kiosks and 21km pipeline installation by using 1 ½ inch pipe from the previous station into 2.5-3.5km distance. For the water kiosks a total of 35 Water committees was established and trainings were conducted accordingly. Mobilization of community participation in water construction and 35 volunteers took training on CLTS topic.

Resilience-boosting through WASH for Shalla (ReWASH) helped increase resilience to drought affected people in the area of water, sanitation and hygiene for more than 8.000 beneficiaries in 2 Kebeles of Shalla Woreda and a budget of 8,5000,000 ETB. The main achievement of the project was that 32 water tanks and 2 cisterns were constructed including 4 in institutions. 72 WASH committee members (32 Female) were trained, 1,875 households benefited over 3 months of water treatment chemicals, 2 school latrine blocks were constructed, 1,150 households benefitted from 690,000 liters of water through emergency water trucking for 1 month and 184 individuals (37% female) benefited through trainings and learning visits.

Distribution of water treatment chemicals, water trucking & RWH, Hygiene promotion Shalla Woreda at four kebeles for 3000 households (approx. 15.000 people)  with a budget of 3,250,000 ETB. Supported by AutRC & Swiss Red Cross. According to this project two water tanks with the capacity of 100,000 litter were constructed, West Arsi Zonal Branch delivered 44,000 litters of water per day for three months and distributed water treatment chemicals for 3000 HH for three months and 130 individuals benefited through trainings.

Water trucking, hygiene promotion and Supplementary food rationing for Shalla/Adaba/Dodola/Nensabo Woreda for 19,620 Beneficiaries with a budget of 3,500,000 ETB, supported by AutRC and Spanish red cross. The main achievement of this project was we distributed supplementary food distribution, wheat flour, edible oil for more than 1200 HH, 1,500 households benefitted from the distribution of 1,460,000 liters of water through emergency water trucking for 2 months, and 75 individuals benefited through trainings. 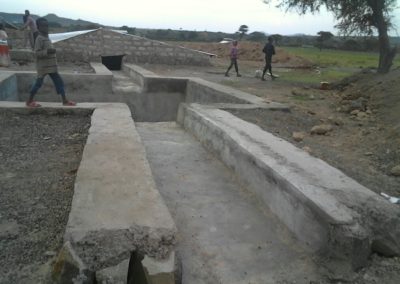 2 cisterns were constructed under the Shalla ReWASH project. 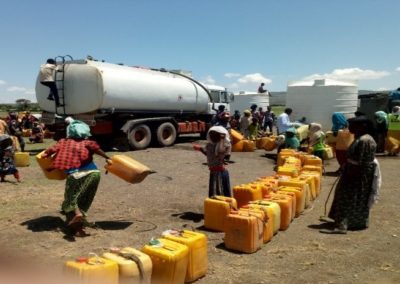 As part of drought response, water was trucked and distributed among the beneficiaries. 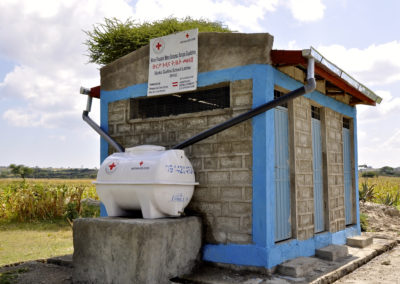 The school latrine with rain water harvesting option was build under the Shalla ReWASH project. 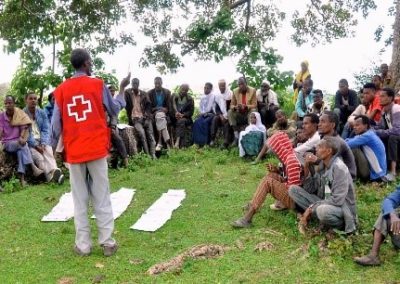 The volunteers and community gather under a tree for their PHAST training.

The overall objective is to contribute to the overall national improvement of livelihood, food security & nutrition, and gender diversity and inclusion through decisive participation of key partners in and abroad of Ethiopia.

More specifically,West Arsi Zonal Branch aims to improve the livelihood, food security and nutrition of 1250 target beneficiaries through supporting their agriculture, livelihood, and petty businesses, and reducing traditional attitude and practices on gender diversity and inclusion by empowering at least 432 local communities and key stakeholders in Diki kebele of Kokosa woreda.

This collage was done by West Arsi Zonal Branch and it shows the planted seedlings in the top right and bottom left. The other images in the top left and bottom right show the beneficiaries during sheep distribution. Additionally, they received agricultural tools, seeds and trainings on soil and water conservation.